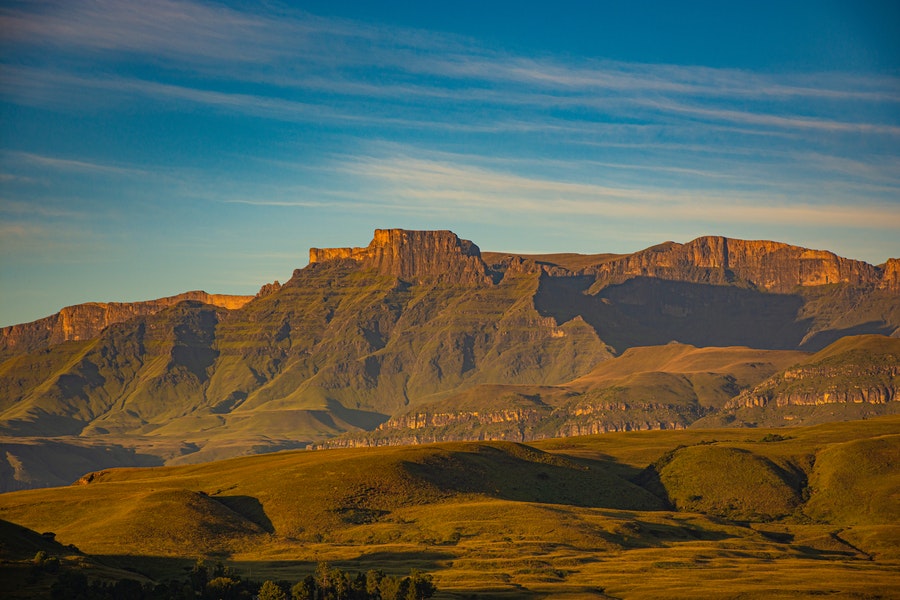 Running parallel to the south eastern coast of South Africa for about 1,125 km, is the impressive uKhahlamba or Drakensberg Mountain Range.

Declared a UNESCO World Heritage Site in 2000, the Drakensberg offers its visitors an unforgettable experience filled with adventure, history, and breath-taking scenery!

Also known as the ‘Berg’ by locals, the Drakensberg is the highest mountain range in southern Africa, with its tallest peak, Thababa Ntlenyana, reaching 3482m!

It forms part of the easternmost part of the Great Escarpment and feeds the Orange River, while serving as South Africa’s main watershed. Its Zulu and African names, which mean ‘Barrier of Spears’ and ‘Dragon Mountains’, respectively, speak to the magnificent grandeur of this sierra.

Dotted along the range are about 600 rock art sites, with thousands of images painted by the nomadic San people, which date back about 4000 years! Other artworks, which are traced to the 19th and 20th Century are accredited to the Bantu. The high-altitude wetlands in the Drakensberg have been declared a RAMSAR site, in order to protect and conserve these complex and dynamic ecosystems.

The Drakensberg region is stunning all year round, with a relatively moderate climate due to its high elevation. In the summer months, between December and February, the mountains are showered with bellowing thunderstorms, mixed with warm, sunny periods.

As winter creeps in, the peaks are dusted with snow as temperatures average about 20 degrees during the day. The transition months are the most beautiful, with spring bursting in a host of floral colour.

The Drakensberg is home to a variety of antelope, including Eland, Reedbuck, Grey Rhebok, and Oribi. Baboons roam the range too, with giraffes, buffalo, blue wildebeest, hyenas, lions and cheetahs to be seen in the savannah region of the range.

Along with the animal population, the Drakensberg is renowned for its incredible wild flower scene. Over 2000 plant species can be found, with nearly 100 of those being endemic or near-endemic. One of the most prized jewels of the mountains is the rare Protea nubigena, also known as the Cloud Sugarbush.

Other flowers, like the Berg Bottlebrush, Red-hot pokers, Agapanthus, Candelabra lilies, and River bells add to the natural canvas.

The Drakensberg offers its visitors a broad selection of activities, catering to young and old, adventurous spirits and those simply looking for a break from the business of life. Most popular are the hiking trails. These range from four hours to three days, giving people with different fitness and energy levels the opportunity to join in what they feel comfortable with.

The milder hikes include Rainbow Gorge, Injisuthi Battle Cave Walk and Sugar Loaf, which are not only more easy-going, but are also quite affordable, at R30 to R70. Giant’s Cup Trail and the famous Amphitheatre Hike are a lot more work and take roughly seven hours to complete. These can also have a few extra costs, which include guides.

Icidi Gorge is a 3-day nature experience. Although it is a lot more physically demanding than other treks in the Drakensberg, it pays off with the viewpoints it boasts as well as features you pass, like the silvery Tugela Falls. The Bell Traverse requires a similar fitness level and also lasts three days, but again, is completely worthwhile considering the striking mountain scenes you get to feast your eyes on!

Mnweni Pass ad Rockeries Pass takes you through the most isolated parts of the Drakensberg, which, for thinking and getting some peace, is ideal. It takes three days to finish, with two special nights of camping under the stars to add to your mental memory box!

Do it with Curiocity

At Curiocity, we believe in satisfying the curious traveller’s appetite! We are passionate about making the exploration of South Africa’s extensive beauty, culture and history a true adventure.

Curiocity has a specially designed Durban to Drakensberg Weekender package, where you have the opportunity to enjoy all that is Durban, before making your way to one of the most beautiful places in the world, the Drakensberg.

If you are feeling inspired, book your stay with us and enjoy all that the tip of Africa has to offer!

Sportspitality | What that means in the Modern Era