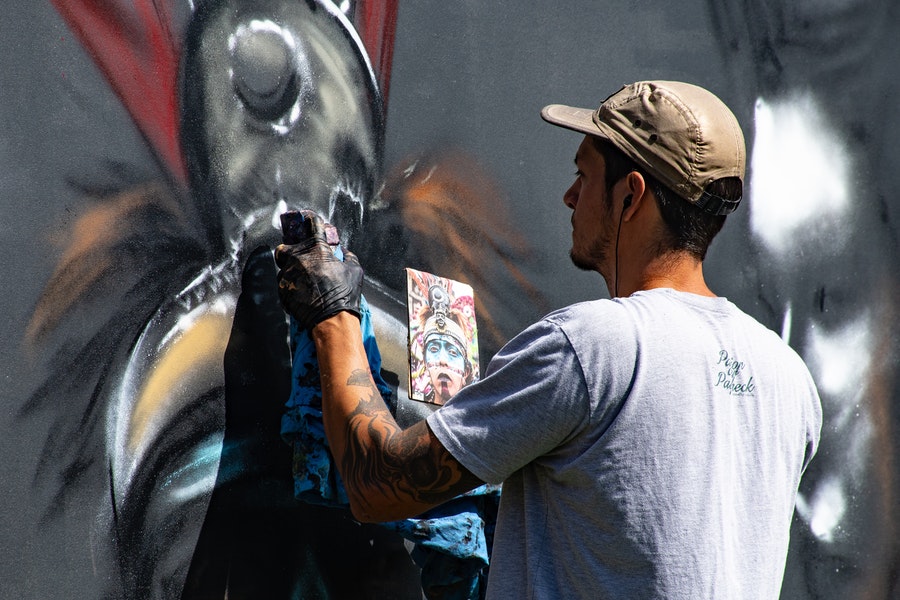 Born out of protest and activism, street art has long been a misunderstood medium. Often cast into the shadow of fine art, this form of public and creative expression has a history of being written off as vandalism and illegal activity.

Today, attitudes are starting to shift, as more artists are being invited to colour the landscape, telling stories, provoking thought, and lifting spirits.

What is street art?

Street art, which grew from graffiti, can be a mural, or any other kind of visual statement in a public space, be it on a wall, at a bus stop, on stairs, along stairs, across a train, on a rooftop… anywhere an artist could reach.

Its past is tied to South Africa’s political landscape, often commenting and standing against colonial oppression and apartheid rule. While this was once banished to the illegal sphere, things are starting to change.

As cities begin to celebrate different voices and stories present in this country, colour is being welcomed in our concrete jungles as a means of reflecting on the past, how it has seeped into our present, and a way of looking forward to a reimagined future. It is slowly being recognised as a vital public expression.

Organisations like Graffiti South Africa are making an active effort to create a platform where artists are free to share and showcase their work, further pushing it to be recognised as legitimate art. Their site displays artworks from all over South Africa, with albums from leading street art cities like Cape Town, Johannesburg and Durban. They also have their own team of talented artists who offer commissioned work.

The Group Areas Act, passed by the apartheid government in 1950, imposed a separation of South Africans according to race. People of colour were forcibly torn from their homes and communities and relocated to the outskirts of cities. In Cape Town, these areas became collectively known as the Cape Flats – a large stretch of flat, sandy wasteland, away from everything people had known before.

In the 1980’s, street art started becoming a means through which people in the Cape Flats could express their hurt, pain and anger towards the brutal discrimination of the apartheid government. Since then, it has spread across the city, becoming a common phenomenon throughout Cape Town. Mitchells Plain, District Six, Woodstock, and Observatory are areas where street art has particularly characterised the landscape.

Some of the artists behind Cape Town’s canvas include:

Growing up in Mitchells Plain, Falko first picked up a graffiti can in 1988, when he was still in high school.

Over the decades his art grew and developed, becoming an integral part of the communities he splashed with his palette. Although he has done a wide range of work, his favourite subjects are elephants. His gentle giants appear in vibrant colours throughout Cape Town, the rest of South Africa, and now, the world.

After losing his father at an early age, Skhumbuzo Vabaza, better known as Skubalista, turned to art as a means of recreating his father’s memory through stories. It was here that he learnt to use his heart and soul to create art, and more specifically, large scale street art.

In an interview with SA Creatives, Skubalisto explained that,

“Nothing can compare to using your whole body to create, it feels like a composition of performative visual art that literally leaves your lungs burning from the fumes, your muscles burning from the ladder trips, and crouching low. Painting murals is literally my first love and was the key to everything you see today.”

He loves featuring people, and uses a variety of techniques to put faces on walls.

Cape Town’s Nardstar* is one of the city’s few female street artists making her name known through her bold, geometric-like style.

Her topics are dynamic, including the country’s fauna, flora and more recently, women of colour. She believes in growing positive representations of the marginalised, and does so in a powerful way with her art. Nardstar is a humble heart behind the vibrant images we see. Her work features in Cape Town, Paris and even New York.

Jozi has become another hub of artistic flair, with its stage open to a range of local and international artists.

Although Joburg joined the street art scene much later than Cape Town, the City of Gold has quickly risen to become a core of cultural and creative significance. Much like Cape Town, the struggles that lie at the centre of Joburg’s story sparked its graffiti and street art journey.

In 2020, Curiocity offered a virtual street art tour through Maboneng, a precinct in the inner city dedicated to the celebration of art. The tour explores some of the breath-taking work you can expect to see around every corner. Among others, Braamfontein and parts of Soweto add to the city’s energetic canvas. Faith47, Karabo Poppy and Dbongz Mahlathi are among the most featured artists. See more of this in the video below.

With her fluid, often monochromatic style, Faith47 has become one of the most well-known street artists in South Africa since her start in 1997.

She interrogates the human condition and the complexity of social and political structures, creating pure poetry. Faith47 has collections all over the world, through which she has broadened her artistic scope and engaged with a broad range of media forms, including tapestry, sculptural works and prints.

Karabo Poppy is a young, up-and-coming street artist and graphic designer from Vereeniging (about 54km from Joburg), who has already made quite an impression.

Her unique signature involves meshing traditional African motifs with a contemporary urban aesthetic. One of her most popular works is her transformation of the abandoned Eyethu movie theatre in Soweto, where she drew inspiration from the hope that change is still possible.

Standing by the belief that a colourful environment breeds creativity, joy and hope, DBongz is an artist passionate about creating inspiring spaces.

With nature as his muse, he incorporates elements of it in most of his work, with people being his main focus. DBongz conjures skilful, compelling stories with the pieces he has dotted all around the city and beyond since 2008 when he first began.

Street art is on the rise and is not to be missed, quite literally! Curiocity offers the curious traveller a base for exploration. Book your stay in your city of choice and take a stroll through the colourful streets of South Africa.

Victoria Yards | The Rise of the Creative East