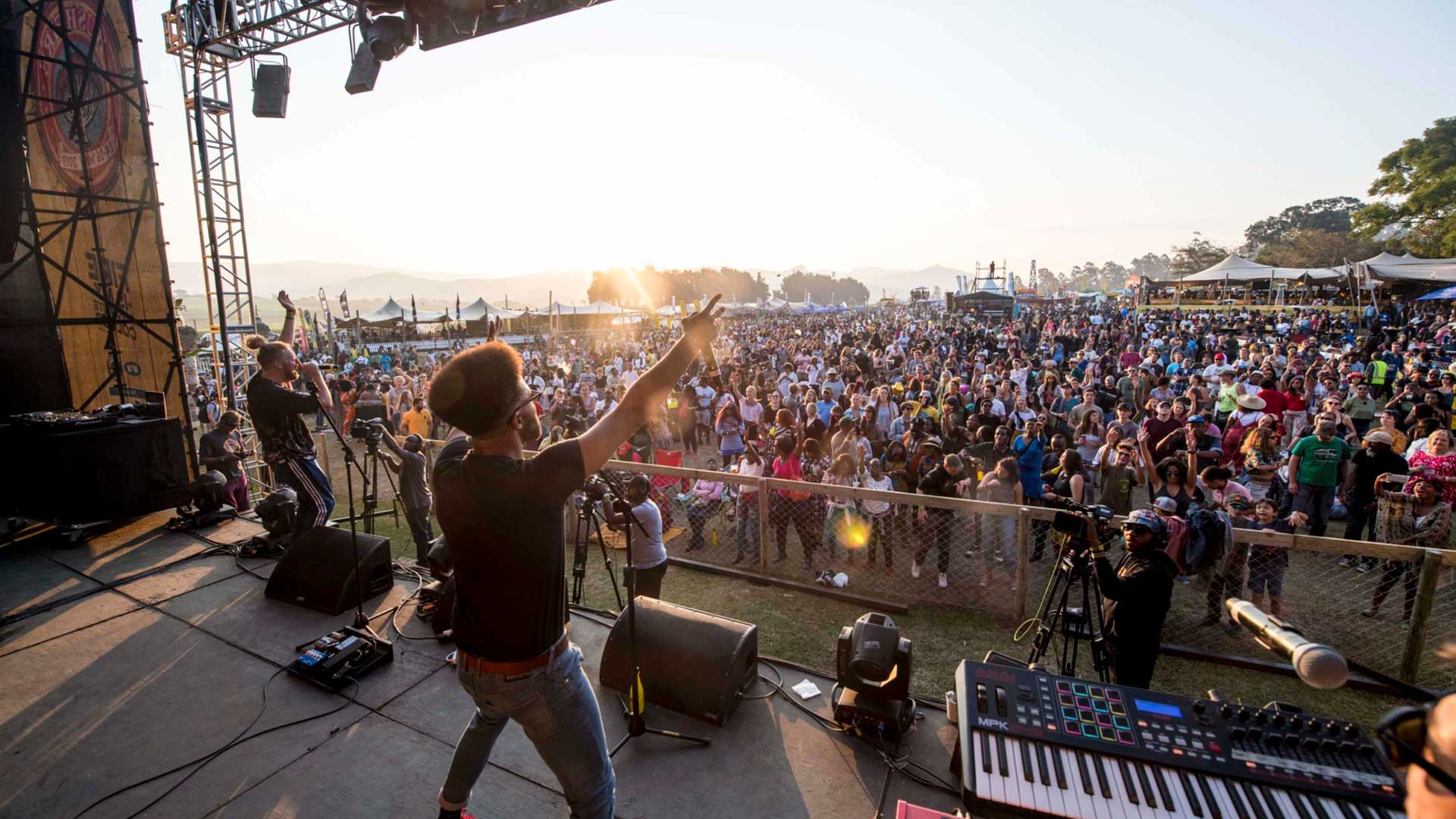 No matter what time of year you visit South Africa, there’s always something going on that you don’t want to miss out when it comes to festivals. As arguably the festival capital of the continent, there is an experience for everyone.

From music and art to food and drink, we’ve got you covered below on the events you’re gonna want to hit up during your time here.

If floating down a river and soaking up the sun while listening to live music sounds like your kind of thing, Up the Creek is the festival for you.

Located on the banks of Breede River in Swellendam, Up the Creek is the second longest-running outdoor music festival in South Africa and this year it’s a special one as they celebrate their 30th year.

You can expect a whole variety of genres across four stages from rock and roll to indie folk, so grab your tickets (and inflatables) and get ready for a weekend you won’t forget.

Known for its world-class lineups, the DJs headlining this year’s main stage are none other than DJ Snake, South Africa’s very own Black Coffee and Steve Aoki.

The two-day event starts in Cape Town on February 28th before heading to Johannesburg a day later on the 29th so get your tickets quick!

Our neighbourhood will be getting lit up as Cape Town Carnival takes to the streets.

As a celebration of South African culture, music and arts, thousands of people head to Green Point each year to watch the colourful parade of performers, musicians and moving floats.

This year, the theme is ‘Incredible Journey: Sounds of South Africa’ so if you’re looking to deep-dive into the country’s rich cultural history, you’re going to want to keep this day free and come join us at CURIOCITY Cape Town for the celebrations.

Have we got any jazz fans in the house? If so, Cape Town International Jazz Festival is your where you wanna head.

As the fourth largest jazz festival in the world – and the largest on the African continent – you’ll have the chance to see top local and international jazz musicians do their thing at the foot of Table Mountain.

Hey, Splashy Fen might be getting on as South Africa’s longest-running and oldest festival but that doesn’t mean it’s any less good.

Located on the doorstep of the Drakensberg Mountains – just a 3-hour scenic drive from Durban – Splashy Fen is more than just a music festival. It also offers yoga, trail running, drumming and craft and food markets.

Dubbed the country’s friendliest – and most beautiful – music festival, fans from around the world head to the east for four days of music, laughter and fun.

Taking place in the Tankwa Karoo desert, AfrikaBurn is a festival like no other – think out there art installations, mutant vehicles and stunning costumes as well as live music and performances.

It’s been described as the continent’s most ‘unique, unusual and exhilarating festival’ but there’s no use just reading about it – you really need to come and see for yourself.

This year’s theme is ‘Afroboratory’, inviting attendees to explore ideas around experimentation and get out of their comfort zones. Our tip? Pack everything you need – and we mean, everything (including enough water for the whole trip).

As ‘eSwatini’s answer to Glastonbury’, MTN Bushfire Festival has earned quite the reputation. 2020 will mark the festival’s 14th year, bringing music and arts from all over Africa to the continent’s smallest country – the Kingdom of eSwatini.

As well as live music, the festival offers poetry readings, theatre and dance performances, film screenings and more. Dedicating to promoting social responsibility, MTN also use their platform to raise awareness for the need for social change and 100% of its profit is donated to local charities.

This support led to them winning the African Responsible Tourism Award for Best Sustainable Event Award in 2017. This year’s line-up hasn’t been announced yet so watch this space!

Held every year to commemorate the 1976 Soweto uprisings through a celebration of creative expression, heading to Basha Uhuru Freedom Festival is one of the best ways to experience Africa’s finest creative art, design, film and music talent.

Located on Constitution Hill, you can expect a variety of up and coming South African sounds, smash hits as well as some seriously good local foods.

The Corona Sunsets Festivals are back again this year and it’s hitting up Durban in Septembmer. If you’re not sure what to expect, it’s pretty much a day of good music, relaxed vibes and plenty of beer – oh, and not forgetting a seriously good sunset.

This festival also lands in Cape Town in March and Joburg in December, so you’ve got 3 chances to be a part of it.

Be sure to grab your tickets now to secure your spot!

As one of Cape Town’s hottest festivals, Rocking the Daisies is one for the diary! This year you’re gonna want to grab your ticket real quick when they go live because the world’s biggest grime artist, Stormzy, is headlining.

Celebrating their 15th year running, it’s set to be one of the best yet and is the perfect way to see in Spring here in the Mother City.

If you’re celebrating the New Year in Joburg, there’s only one place to be – and that’s Afropunk. As an international movement, Afropunk landed in Joburg to celebrate ‘music, style and global black culture and creativity’ and we’re here for it.

Past acts have included huge names on the scene including Solange, Goldlink and Masego.

Join our crew who head there together every year and let’s start 2021 as we mean to go on.

Got your fix of South Africa’s best festivals? Remember, you can now stay with us in Cape Town, Joburg and Durban. You can get 15% off your stay when you book via our site with code, ‘TRIOCITY’. See y’all soon…

Victoria Yards | The Rise of the Creative East